There are many people in the world who will say that values are subjective. You may or may not be one of them. For many, the reasoning behind this stance is that they see that different people value different things, and they think that if values were objective, then everyone would value the same things. So they conclude that all values are the opposite of objective, which is subjective.

This article will give evidence and argument that this view is mistaken; that this reasoning is based on a confusion about what it means for values to be objective. 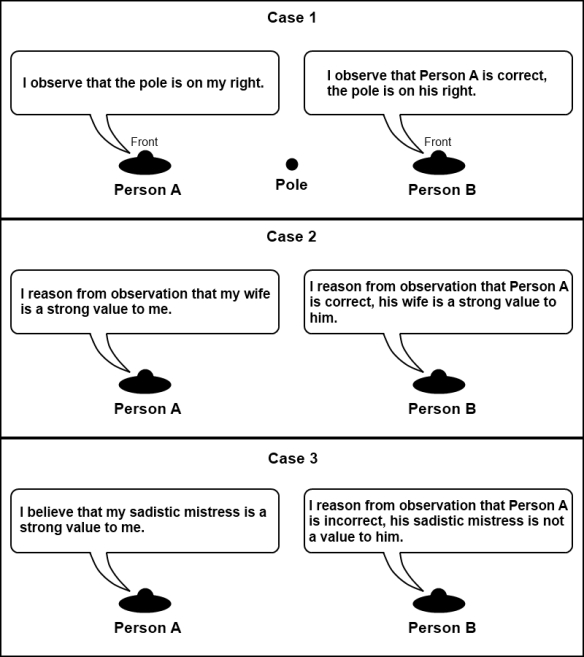 Objective values also specify a kind of relationship. (1) A value is something that someone acts to gain and/or keep that sustains his own life in some way. For example, food–eaten at certain times and in certain amounts–is a value to the person eating it. Shelter is a value to the person who sleeps there. An enjoyable, productive career is a value to the person who undertakes it. Friends are a value to the person who enjoys their company and benefits in the long-term from their presence. All things that can be said to be objective values are values to someone, because they stand in a life-promoting relationship to that person. Proper values are things that are pursued because they are good for the pursuer. (This is, in fact, the ultimate rational basis for the term “good,” both in economics and in morality, Plato’s Forms and Kant’s Categorical Imperative notwithstanding. The moral good is good for the person acting morally.)

Because values are things with objective, factual relationships to a person’s life, their statuses as values are discoverable by reasoning from observation. Two people, if they both have enough information and reason properly, will reach the same conclusion about whether something is or is not a value to a given person. (See Case 2 in the figure.) Different things may be values to each person, but there is an objectively correct answer as to whether something is a value with respect to each person. This is directly analogous to the case of the pole. Person A’s wife is observably a strong value to him. Person A’s wife may not be a strong value to Person B, but Person B can agree from his observation that Person A’s wife is a strong value to Person A.

Values are relative to a valuer, but there is one correct conclusion (given enough information) about the value of a particular thing to a particular individual.

Many values can be a value to one person while never being a value to another, such as a piano to a musician, versus a non-playing bricklayer.  But certain values are universally required for all human beings to thrive, at certain times. These I will term “universal-conditional” values. A prominent example of this type of value is food. Food is required by all human beings to live, but not all the time. Eating when one is already very full is painful and anti-life. Buying vastly more food for oneself than one can eat is also against one’s life. The pursuit of food is a value that must be balanced with other values.

Other examples of this type of value are water, mental and physical exercise, sleep, and sexual relationships/activities. Actively pursuing any one of these values all the time would mean the neglect of other values required for life.

At any given time, one of these may be a proper value for Person A to pursue, and not for Person B, or vice versa. But in the long term, these values are objectively required for everyone. It is not a matter of anyone’s opinion whether he needs to eat to live.

In The Virtue of Selfishness, Ayn Rand identifies three values that she calls “cardinal.” (p. 27) These are reason, purpose and self-esteem. These are values to be actively pursued by all human beings in every moment of consciousness. Thus, I term these examples of “universal-unconditional” values. (3)

These broad values always have the same life-promoting relationship to every conscious human being. It is a fact for both Person A and Person B that these values are life-promoting for each of them, regardless of their individual circumstances.

What if Someone Chooses Something Other than His Own Life as His Ultimate Value? Isn’t that Choice Subjective, Thus Making all Values Subjective?

The fullest answer to this is beyond the intended scope of this article, but I want to address it relatively briefly.

But if it were really the case that there is an arbitrary choice of an ultimate value, one must ask: Why is your loved one, and not a collection of skulls, your “ultimate value?” There are billions of choices available to pursue as an ultimate goal. The preservation of a ripe banana; the evacuation of glass bottles; the pulling of every fire alarm in the world–why not these as an ultimate goal? If the choice is subjective, then every choice is as good as every other. So why don’t we see more people exhausting themselves and suffering for the sake of bananas? Why would anyone have a problem killing every human and animal he sees to harvest its skull?

What these people don’t realize is that it is precisely because the wife or child has a strong relationship with their own lives that they might consider dying to save them. The valuing of the loved one is properly based on his or her contribution to one’s own life (especially, one’s own psychological well-being.) Thus, it is possible under certain circumstances, that a person can protect his own life by dying to save someone else. He can protect his life from the torturous, terminal ravages of a horrendous loss by shortening his life.

It is nonetheless true that every adult human being has the power to choose an ultimate purpose other than his own life. But this choice does not change the fact that life is the standard of value of living beings. A flourishing (happy) life takes a constant, comprehensive process of life-directed action to establish and maintain it. Actions not taken under the principle of building one’s life fall under the principle of letting it decay or actively destroying it. As a living being, a man has no choice about the facts of his nature qua living being. Thus, he has no choice about the fact that his only choice is to pursue his own life as his ultimate value, or to suffer, decay and progress toward death (mentally, if not at first physically.)

So, the basic answer is that one’s own flourishing life is the only ultimate goal based on the facts of one’s own nature. Any choice of another ultimate goal is the arbitrary choice of pointless suffering and (likely) early death.

For a more thorough discussion of life as the moral standard of value, I recommend Viable Values: A Study of Life as the Root and Reward of Morality by Tara Smith.

(1) Note that Ayn Rand defined a “value” as “that which one acts to gain and/or keep.” This was her original, ethically neutral definition. It subsumes all those things which anyone–egoist or altruist, rational or irrational–may act to obtain. An irrational value can be subjective, and need bear no actual relationship to any ultimate goal. But with an analysis of the source of values, and the proper, rational basis of ethics, Rand produced a second definition of “value”, which also specifies that something stands in a certain relationship to an individual’s life, (a beneficial relationship.) You will often see Rand and other Objectivists use the term “value” with this second definition. Here, I’m discussing “value” in this second, fully rational, fully objective sense. (For discussion of the basis of doubly defined concepts in philosophy, see Dr. Peikoff’s lecture course, Unity in Epistemology and Ethics.)

(2) There is a distinction to be observed here between errors made in the course of rational evaluation and “errors” that result from the irrational practice of relying on raw emotion. These are both examples of being wrong, but under normal circumstances, the overall import of the two types of wrongness for a person’s future prospects in life is vastly different.

(3) The only “condition” being consciousness, which is necessary for the characteristically human pursuit of all values. (Sleep is valued when unconscious only in a vegetative biological sense, not in a human sense.)

The Nature of the Morality of Rational Egoism: Short Notes

On Fairness and Justice: Their Meanings, Scopes, and How They Are Not the Same

Why Each Person Can Have Only One Ultimate Value

11 thoughts on “Values Are Relational, But Not Subjective”