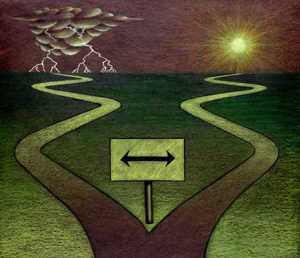 Determinism is the doctrine that all events, including human choices, are the necessary results of prior events, and that no human decision could have been different than it was.

(The only way to self-consistently hold determinism is to hold that conceptual beliefs are completely infallible, and that there is no such thing as a false belief. And then there would be no need to argue for determinism or even to assert it: everyone would agree on every issue with which they had experience.)

Thus, a libertarian theory of free will is the only type that is tenable. The rest of this post will explain how and why this is so. First, for intuitive simplicity, I will make use of a very apt analogy for human minds, beliefs, and truth. Then I will present a formal reductio ad absurdum of physical-mental determinism in both an unabbreviated and an abbreviated form. Then I will briefly describe the Objectivist theory of free will (volition) and its consistency with the Objectivist view of causality and the laws of physics.

Now imagine that there’s a coin-flipping robot at the table. The robot has some variability built into it, such that it doesn’t flip a coin exactly the same way each time. Now let’s say we give this robot a dime and have it flip it onto the table. If the coin lands with heads up when the heads card is on top, the coin corresponds to the card and is said to be “correct.” Similarly with tails matching tails. If the coin shows the opposite side from the top card, it is said to be “incorrect.”

Now let’s say that we use magnets to engineer the situation such that whichever card is on top, it will inexorably cause the coin to turn with the corresponding side up. Now can we say that the coin “knows” which card is on top? No, we still cannot. The coin infallibly follows the magnets, whether or not they cause it to match its faces to the cards. What it infallibly “knows” is only the state of the magnets. Any correspondence of the coin with the cards is still a coincidence of the arrangement of the magnets with the cards.

The only way that it is possible for the coin to be both fallible and have the ability to know which card is on top, is if the coin is able to choose to go through a process that lets its “heads” position be caused by the “heads” card being visible, and its “tails” position be caused by the “tails” card being visible. In essence, the coin chooses to make its turning be caused by the visible card. When the coin chooses to go through the process, it can see that its resting position was caused by the image on the top card. Yet it is also fallible. If it wasn’t careful enough in guiding its motion in response to the card, then it can make errors.

The cards in this analogy correspond to facts in reality, and the coin corresponds to a consciousness. The side the coin shows can represent either a perceptual awareness of, or a conceptual belief about reality. The initial, random setup corresponds to the usual idea of the physical predetermination of human minds. The situation where the coin sees the cards and automatically responds, corresponds to the Objectivist view of how humans’ raw perception and the consciousnesses of other animals work. (They are infallible, in that they can do nothing other than what they do, given their situation.) The situation where the coin can choose to turn in response to the sight of the cards corresponds to the conceptual level of knowledge in humans. (This is the level that is fallible in humans.)

P1: If I know that the statement “Preexisting physical factors necessitate my decision to believe in the content of my supposed knowledge,” is true, then I possess some actual knowledge.

P2: If I possess some actual knowledge, then I believe in the content of my supposed knowledge because this content is true.

C1: Therefore, if I do not believe in the content of my supposed knowledge because this content is true, then I do not possess this content as knowledge.  [Contrapositive of P2.]

Reductio ad absurdum of “knowledge of the truth” of the statement, “Preexisting physical factors necessitate my decision to believe in the content of my supposed knowledge.”

C6: Therefore, the statement that “I know that preexisting physical factors necessitate my decision to believe in the content of my supposed knowledge,” is false.

C1: Therefore, not (belief because content is true) implies not knowledge. [Contrapositive of P2.]

P4: Content is true is not equivalent to physical factors.

C3: Therefore, determinism implies not (belief because content is true.) [From P3 and C2.]

C4: Therefore, determinism implies not knowledge. [From C3 and C1.]

C5: Therefore, determinism implies (knowledge and not knowledge.) [From P1 and C4.]

It should be noted at this point that any “cause of belief” premise (except “belief because the content is true”) can be substituted for “determinism” and “physical factors,” and the argument will still be a reductio of that premise. This includes any sort of quantum or metaphysical indeterminism that would posit “fundamental randomness” as the cause of beliefs.

Also, because the premise of determinism invalidates all conceptual knowledge, if it were “true” one could not make any statements whatever as though they were “known.” One couldn’t even hold any “knowledge” of the “possibility” of anything, including one’s fundamental choices being determined by prior factors. Any claim to the “possibility” of determinism wipes itself out.

Explanation/defense of P2: If I believe that something is true, not because I have seen the fact or the results of its being true, but because I want it to be true, or because some subconscious trigger made me think it’s true, or because I made some error, then I cannot be said to know that it is true. Such beliefs are not based on reality, with respect to the truth of the statement, but on other factors, and these beliefs cannot be relied upon as actual knowledge can.

What is the Objectivist Theory of Free Will?

Objectivists typically refer to the philosophy’s concept of free will as “volition.” Volition pertains to conceptual thought in humans. At root, it is the ability, in any given moment of consciousness, to focus one’s mind and think–or not. It allows an individual to exert the effort to think or not within the context of his specific circumstances, level of knowledge and emotional state. It does not allow an individual to do or “will” just anything with his consciousness. It doesn’t allow for free-form, ex nihilo “self-creation,” as the existentialists typically hold.

Volition does allow “self-creation” within the sphere of how much one adopts the conceptual level of consciousness as one’s cognitive mode of functioning. And the level of an individual’s cognitive functioning at various points in time has tremendously important consequences for the development of his character and actions. So volition is not omnipotent with respect to consciousness, but it is causally efficacious.

Thinking can be made easier or more difficult by various mental and physical circumstances. But, so long as one is conscious and has a basically healthy brain, he is able to persevere in thinking amid difficulty, or neglect thought whenever he wishes. Nothing can strictly determine one choice or the other.

What About Cause and Effect?

The form of causality that Objectivism holds as axiomatic–that is, truly fundamental and truly universal–is the “entity-to-action” cause-effect relationship. Entities are what they are, and so can only act as those entities. The actions of entities are fundamentally caused by the entities, themselves.

Objectivism does not hold an “event-to-event” or an “action-to-entity” version of causality as most fundamental, or as necessarily universal. Inanimate objects tend to passively react to external actors, and so follow an “entity-action-entity-action” pattern of causality. (Though some of them, at least on a surface level, show spontaneous action, such as radioactive atomic nuclei.) The nature of the entity being acted upon is crucial to the action of that entity (the effect.) If a billiard ball hits a soap bubble, the reaction of the bubble will be very different from that of another billiard ball.

Human volition is perfectly consistent with the fundamental nature of causality: human beings can only act in accordance with their nature and must choose to think or not. The choice is caused by the individual, and this choice is a first cause in a subsequent chain of mental effects and physical actions. Thus, human free will is one form of causality, not a violation of causality.

What About the Laws of Physics?

When human beings use deterministic laws of physics–like Newton’s or Einstein’s–to describe and predict events in the world, this is done on the implicit premise that any event we are attempting to describe or predict has a preexisting, physical set of conditions that constitute a sufficient condition for its occurrence. By it’s very definition, a deterministic physics would not recognize a fundamental choice as a “proper” explanation of any event.

Objectivism recognizes that all rational principles (with the exception of the basic axioms) have contexts of applicability. Newton’s laws are valid and can be used productively within the context of things that move slowly relative to each other and do not require too great a precision. Einstein’s relativity can be used if the scale under consideration is not comparable to particle wavelengths. Etc.

Principles, such as the laws of physics, are not “out there in reality” as such, and are not themselves causally efficacious in reality. They are our way of expanding our knowledge of physical reality beyond the immediately perceived. Where applicable, they allow volitional human beings to predict future events (or event parameters) from past or current events, involving purely physical entities, (i.e. entities not possessing consciousness.) (1)

So now you’ve seen an ironclad proof that human beings cannot be physically predetermined, so long as they are conscious, capable of conceptual knowledge and fallible. You have the choice to think about this proof and verify it, or not. You also have the (derivative) choice to read a more detailed account of the Objectivist theory of volition, as understood by Harry Binswanger, here:

A Refutation of Determinism

Much of what Ayn Rand wrote about volition is here: Free Will at the Ayn Rand Lexicon.

Objectivism vs. Intrinsicism vs. Subjectivism: A Short Summary

The Arbitrary (from The Objectivism Seminar)

The Nature of the Morality of Rational Egoism: Short Notes

The Bible (New Testament) as Evidence

A Refutation of the Argument from Design

Leave a Reply to Sword of Apollo Cancel reply