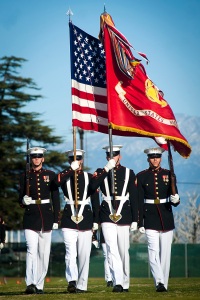 Every Memorial Day, we hear speeches from government leaders praising what they call the sacrifices of American soldiers. On Memorial Day 2013, President Obama said:

[N]ot all Americans may always see or fully grasp the depth of sacrifice, the profound costs that are made in our name — right now, as we speak, every day.

Early this morning, I returned from Afghanistan. Yesterday, I visited with some of our men and women serving there — 7,000 miles from home. For more than 12 years, men and women like those I met with have borne the burden of our nation’s security. Now, because of their profound sacrifice, because of the progress they have made, we’re at a pivotal moment. Our troops are coming home. By the end of this year, our war in Afghanistan will finally come to end. And yesterday at Bagram, and here today at Arlington, we pay tribute to the nearly 2,200 American patriots who’ve made the ultimate sacrifice in Afghanistan. We will honor them, always.

But is it really “sacrifice” that we properly honor on Memorial Day? Or is it something else that we should be focusing on?

On September 11, 2001, 19 Muslim totalitarians boarded American planes and flew them into the World Trade Center buildings, the Pentagon, and the ground in Pennsylvania. What they did was a sacrifice of their lives for the sake of killing “the enemy” and defending what they saw as the sanctity, purity and salvation of their people against the “corrupting” influences of the “decadent” West. Was this act noble because it was a sacrifice? No?

Well, let us ask: How many American soldiers do you know of who go into battle intending to die there? How many go intending to lose limbs? How many go intending to lose friends? If what we honor and revere is sacrifice in the name of freedom–if it is sacrifice that is a good thing, then every soldier and his family should hope that he dies in battle. If the size of the sacrifice in the name of freedom is the standard of moral worthiness in a soldier, then losing his life is the greatest good he can accomplish. If he can’t manage that, then he should at least strive to suffer major injury.

Yet the attitude of wanting to die or be maimed in battle is quite properly abhorrent to most Americans. It shows that the soldier places little value on his life; he does not have the self-esteem to love his life, to want to live it, and thus to love those who enrich that life, such as friends, family and lovers.

So what is it that we properly honor on Memorial Day? It is the love of freedom, and the dedication to fight for it when necessary for its defense.

Freedom is a profoundly good thing for each individual in a society. It is good because it supports and furthers human life and happiness. It allows people to choose what values they wish to pursue based on their own best judgment and enables them to achieve great things. It is in each individual’s best interest to be free, and it is in their enlightened self-interest to fight for that freedom when it is threatened.

We should honor those who are so dedicated to the goodness that is freedom, that they willingly risk their lives to fight for it when it is threatened. They make the decision to risk their lives because they love their freedom and will not stand for its loss. They might die in battle, but that is not their goal and the risk they take is not a sacrifice on their part. Their goal is to defend their freedom and live to enjoy it.

With this standard: the noble defense of one’s own freedom (and the freedom of good people one cares deeply about) in mind, it is incumbent on each of us to look carefully at the wars the US leadership has been asking American soldiers to fight. Are they really necessary as defenses of American freedom, or are they attempts to “help” others who are unwilling to help themselves? If the people of a country are unwilling to be dedicated enough to freedom to really fight for it, and to enact it into law, in the form of protections of individual rights, then it is not a good thing for our soldiers to risk their lives for these people’s “self-determination.” They are risking their lives–putting themselves and their loved ones’ future well-being in jeopardy–for a cause that will not result in good things in the long run. Thus, it is also not good to ask or pressure them to fight in these types of wars.

I consider the deaths of soldiers who died in wars, other than those in defense of American liberty and American interests, terrible tragedies and wastes of human life. These soldiers should be remembered for the good things they did in their civilian life. Those who have fought for what they deeply and genuinely believed would defend liberty and safety in their own country–whether they have lived or died–deserve special praise and admiration. Their military service was an expression of their good character and their dedication to the value of freedom.

Let us thank these admirable individuals and may they always be remembered with great respect and love on Memorial Day.

Israel and the Palestinians: Disputed Land “Belongs” to Whichever Government is Better at Protecting Individual Rights

America Before The Entitlement State

Why Healthcare in the US is So Expensive, and What Can Be Done About It

1 thought on “On This Memorial Day, Let Us Remember, Not “Sacrifice,” But Those Who Have Fought for Freedom”