Karl Marx – The man who has influenced the thinking of socialists around the world more than any other.

I often hear socialists say that socialism is “democratic worker control of the means of production.” But is it really? In this essay, I’ll explain why it’s not, and why the issue of socialism vs. capitalism is a moral and political issue of property rights, rather than an economic issue of “modes of production.” Obfuscation and confusion aside, this ultimately holds true whether the socialism under consideration is classic Marxist socialism, “libertarian socialism,” or whatever other sort of socialism you want to name.

In a mostly capitalist country, like the US in the 1880s, there are many different kinds of business organizations: There are for-profit corporations, non-profit corporations, sole proprietorships, partnerships, credit unions, retailers’ cooperatives, consumers’ cooperatives, and employee cooperatives. That’s right, worker cooperatives can and do exist in what Karl Marx would call a “capitalist society.” Examples of consumers’ cooperatives include REI in the US and “The Co-op” in the UK. Examples of employee cooperatives include the Cheese Board Collective in Berkeley, California, the Rainbow Grocery Cooperative in San Francisco, and the Citybikes Workers’ Cooperative in Portland, Oregon. These latter three are companies where employees own and control the means of production in their company, democratically.

If “socialism” meant “worker control of the means of production,” as in a co-op, then people are perfectly free to have “socialist companies” under a laissez-faire capitalist government that protects private property rights.

END_OF_DOCUMENT_TOKEN_TO_BE_REPLACED 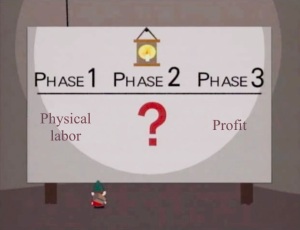 Whether people like it or not, it is a fact that the production of valuable things requires more than physical labor. (I’m looking at you, Karl Marx, with your Labor Theory of Value and “profit as exploitation.”) This is especially true when it comes to industrial-scale mass production. To successfully deliver products at a reasonable price and quality, a company must be organized in certain ways that are effective; there must be communication and coordination between the various departments; there must be management to make sure things keep running smoothly together and that timetables are kept; there must be wealth invested for buildings, machinery and raw materials in the right amounts; any machinery and facilities must be continually maintained; there must be management of sales and distribution of the product; etc.

A collection of factory workers without power tools, without specific roles and without management direction will produce very little and very inefficiently. In any line of business, there is a tremendous amount of strategy, business planning, technical planning, management, and industry knowledge that goes into making a company productive and successful.

As I discussed in my essay, “How Business Executives and Investors Create Wealth and Earn Large Incomes,” a company’s chief executive officer (CEO) carries tremendous responsibility: he is crucial in making large-scale decisions for the company, implementing and coordinating major changes, planning long-term for the future market and technology the company will face, formulating and holding onto a large-scale vision of where the company should go, etc.

END_OF_DOCUMENT_TOKEN_TO_BE_REPLACED

One of the most common criticisms of Ayn Rand that I hear from people (especially on the Left) is that she “loved the rich and hated the poor,” or, in more recent terms, that she “was for the 1% at the expense of the 99%.”

Yet Ayn Rand herself did not really think or judge people in those terms, as should be fairly obvious to anyone who has read her writing without prejudice: Many of the heroes and protagonists of her novels were poor or roughly middle-income, including a young Howard Roark, Steven Mallory, Roark’s friend Mike, Eddie Willers, Cheryl Brooks, Jeff Allen, Gwen Ives, and even her most famous hero, John Galt. Many of Rand’s villains are wealthy businessmen, government officials and scientists, including the mature Peter Keating, Guy Francon, James Taggart, Orren Boyle, Floyd Ferris, Wesley Mouch, Kip Chalmers, and Mr. Thompson.

Rand’s nonfiction explicitly says that what is important in the moral judgment of people is not the scale of their productive ability, but how they choose to use their minds. In her essay, “The Objectivist Ethics” (VoS) Rand writes:

“Productive work is the road of man’s unlimited achievement and calls upon the highest attributes of his character: his creative ability, his ambitiousness, his self-assertiveness, his refusal to bear uncontested disasters, his dedication to the goal of reshaping the earth in the image of his values. “Productive work” does not mean the unfocused performance of the motions of some job. It means the consciously chosen pursuit of a productive career, in any line of rational endeavor, great or modest, on any level of ability. It is not the degree of a man’s ability nor the scale of his work that is ethically relevant here, but the fullest and most purposeful use of his mind.” [emphasis mine]

So Rand doesn’t accept that having more money automatically makes one more moral.

END_OF_DOCUMENT_TOKEN_TO_BE_REPLACED

The definitions of the terms we use have consequences for our ability to think and communicate clearly.

Imagine for a moment that your friend told you that he defines “carpenter” as “one who shapes wood by shooting it with a gun.” You’re baffled and you ask him what word he uses for someone who shapes wood by other means, such as a saw, lathe and sander. He says that he really has no word for this. He has a couple of synonyms for “carpenter,” but they also carry the implication that the person shaping the wood used a gun.

Hopefully, you can see that the problem with this hypothetical situation is not merely that you and your friend are using terms differently: shooting wood with a gun is a terribly impractical way of shaping it into useful forms. If the only concepts you have of wood shaping mean using a gun to do it, then you can’t really talk about those who shape wood using the practical methods in their profession.

Ayn Rand held that the common concept of “selfishness” is in an exactly analogous position to your hypothetical friend’s use of “carpenter.” At root, “selfishness” means pursuing one’s own interests and well-being. But the common use today adds in a second element: “pursuing your interests/well-being by means that are shortsighted and hurtful to others.” In today’s culture, the approximate synonyms of “selfishness,” such as “egoism” and “self-interest,” tend to be regarded with the same connotations of shortsightedness and harmfulness, so they are not much different.