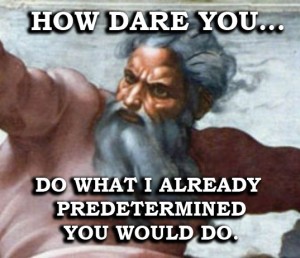 I recently found a blog post where a Christian reprints a debate he and his friends had on Facebook with an Objectivist. It’s a very long discussion where a lot of words are written, yet very little actual debate seems to be accomplished. In skimming this wall of words, one point caught my eye: the Christian participants are claiming that what distinguishes the Christian worldview from others–and what makes it the true worldview–is that it is internally consistent, whereas other worldviews are not.

In epistemology, this view–that what makes something true is (solely) its logical consistency with an overall structure of knowledge–is called the “Coherence Theory of Truth.” To say that this epistemological view is problematic is an understatement; it really is a non-starter. My theory of truth is a version of the Correspondence Theory: the only theory I consider tenable.

But my point here is not to attack coherentism or defend correspondence. Beyond the problems of coherentism, the claim that the Christian worldview is internally consistent is blatantly false. There are several places where I could show logical contradictions, but I only need one irreconcilable contradiction to demonstrate internal inconsistency. So I will confine myself to one: the contradiction between God’s supposed omniscience and human free will. (1)

Free will vs. God’s Omniscience

Most Christians are committed, implicitly, if not explicitly, to what I regard as genuine free will. This is the idea that a person’s choice in a given situation is not necessitated by antecedent factors, but represents a selection among alternatives that could also have been chosen in the same circumstance. (In contemporary philosophy, this is called “libertarian free will” as opposed to the alleged alternative, “compatibilist free will.” I will discuss Christians who hold compatibilist views after dealing with the libertarian version.)

Christians also generally believe that God is omniscient, such that he knows the future outcome of people’s choices and can infallibly implement his divine plan. But if God currently knows, with certainty, the outcome of future choices, then this means that there must be a current fact about those outcomes for him to know. If there is a current fact about the outcome of future choices, then those choices are already predetermined. This means that those “choices” are not genuine choices, because there is only one thing that will happen, with no alternative possibilities. Any “choice” is purely illusory, and thus, there really is no free will. So Christians are logically committed both to the position that humans have free will, and to the position that they do not.

END_OF_DOCUMENT_TOKEN_TO_BE_REPLACED

A necessary truth is a true statement whose negation must imply a contradiction in reality, such that the negation would be impossible.

A contingent truth is a true statement whose negation does not imply a contradiction in reality, such that the negation could have been the case.

The Objectivist View on the Necessary/Contingent Distinction

Causality (the Law of Cause and Effect) is the Law of Identity applied to action. This means that an entity’s actions follow from its nature. That is, the nature of the entity (its attributes, properties, etc.) causes the action it will take in any given situation. In any given context, there is only one action open to it: the one in accordance with its nature. Any other action would contradict its nature.

END_OF_DOCUMENT_TOKEN_TO_BE_REPLACED

By the nature of the following refutation of determinism, it can also be considered a proof (1) of (libertarian-type) volition. It is a refutation of any theory that would deny the existence of non-necessitated events–in the form of fundamental, agent-controlled choices–located in a conceptual consciousness, including incompatibilist determinism and compatibilism.

Here is a short video (by someone else) explaining the general outlines of the argument:

Here is a link to the paper by Harry Binswanger:

A Refutation of Determinism

(1) The argument shows that volition is a prerequisite of all knowledge and that the denial of volitional choice implies self-contradiction, thus establishing volitional choice as an axiom of epistemology. Strictly speaking, I think, by Leonard Peikoff’s definitions, this is not a proof, but an axiomatic validation. It establishes the axiom as absolutely and unquestionably true, but does not involve the specific process of logical proof of the positive proposition. The positive proposition is self-evident in each individual’s experience of existence.